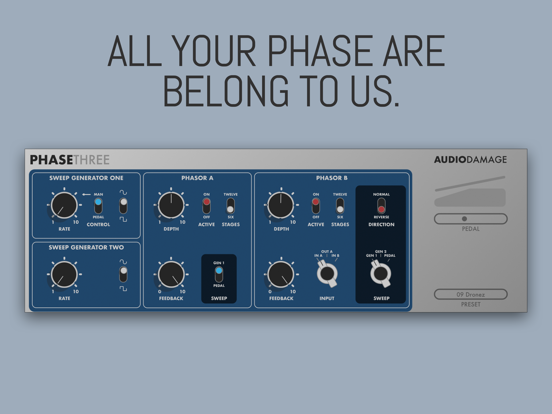 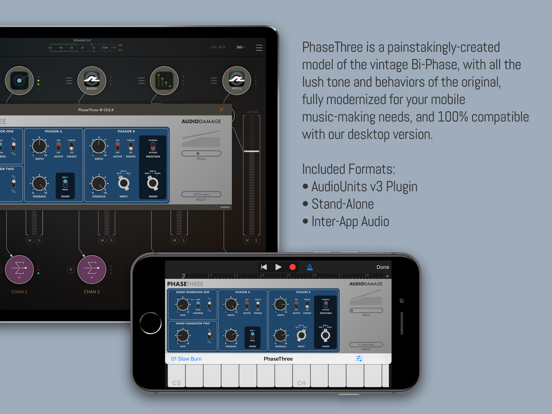 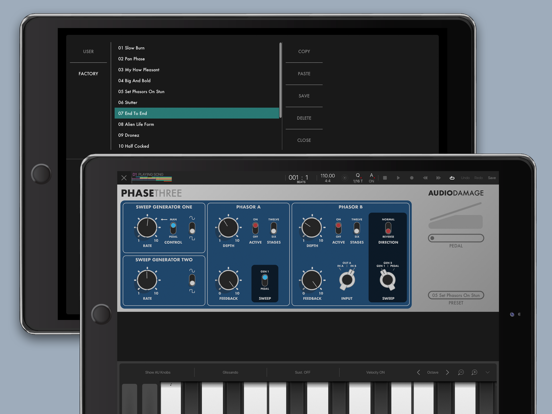 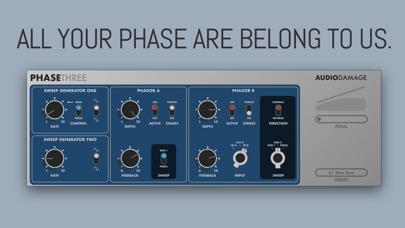 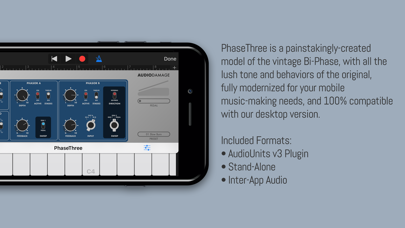 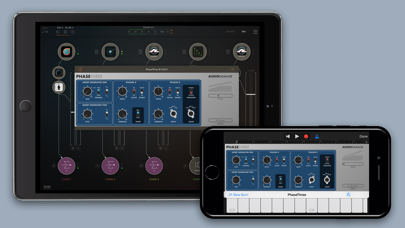 It is worth noting that, due to aging factors, no two Bi-Phase hardware units sound alike; we found the best and most tuneful one we could lay our hands on, bought it for a faintly ridiculous price, and took it apart to see what made it tick. Like you do.

» Perfect model of the original Bi-Phase, down to the response of the vactrols.

» The unobtanium Bi-Phase expression pedal is modeled as a separate parameter, for control by your favorite modulation source.

» XML-based cross-platform preset manager, with copy and paste. (You can even move presets between the iOS version and the desktop version with Handoff.)

To create Panstation, we started with a loose model of the venerable Drawmer M500's panning engine, then added the counting features from the Audio & Design PanScan (probably the most famous vintage autopanner, and the "secret weapon" of many well-known producers).

RoughRider3 is a dynamic compressor.

ChannelStrip is, as its name implies, a channel strip app and AUv3 plugin. With a gate, equalizer, and compressor, ChannelStrip can provide a solid and easy-to-use channel control for your iOS mixing needs.

Ratshack Reverb is a detailed model of that classic of classics, the Realistic Electronic Reverb. Now, you can have the sound of everyone's first analog delay unit, without ever having to change batteries!

Quanta is a six-voice granular synthesizer for iOS11+ in both standalone (with Inter-App Audio) and AudioUnit V3 formats.

ADverb2 is an accurate model of a vintage digital plate reverb rack unit from the 80s, with a few modern tricks up its sleeve.

Discord4 is the latest version of our most popular and long-lived product, our Discord stereo pitch shifter. Originally modeled from the H910, Discord has long since become its own effect and a studio standby, and this version includes major additions to further stretch its capabilities.

Axon 2 is a drum synth driven by artificial intelligence. (Well, "intelligence" might be a strong word. Artificial something-or-other.).

Pumphouse is a sidechain pumping effect. It helps if your DAW doesn't have sidechaining.

One of the original buffer effects, and still one of the best, Replicant is essentially a randomized looper/buffer reverse, with a randomized stutter effect inside the loop.

This is a direct 1:1 port of Audio Damage's Eos 2 desktop plug-in, identical in every way to the Eos you know and love.