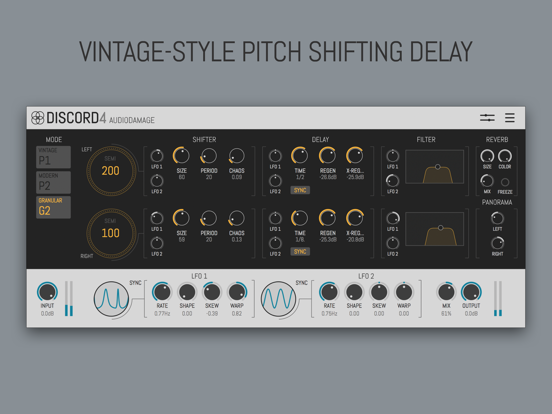 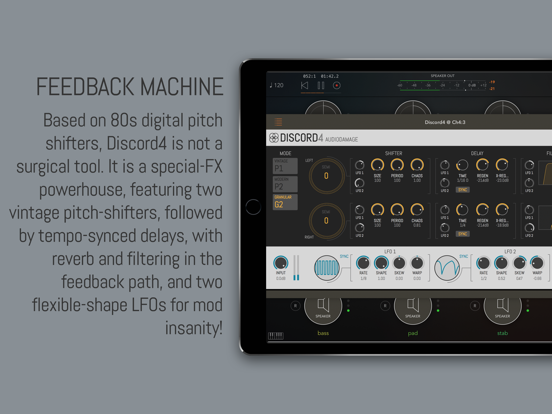 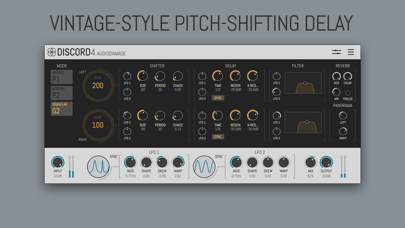 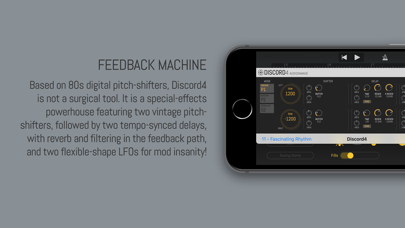 Discord4 is the latest version of our most popular and long-lived product, our Discord stereo pitch shifter. Originally modeled from the H910, Discord has long since become its own effect and a studio standby, and this version includes major additions to further stretch its capabilities.

Discord4 is the latest version of our most popular and long-lived product, our Discord stereo pitch shifter. Originally modeled from the H910, Discord has long since become its own effect and a studio standby, and this version includes major additions to further stretch its capabilities. This application includes a stand-alone version (with Inter-App Audio) and an AUv3 effect for use in hosts that support that format, such as Beatmaker 3, AUM, Cubasis, and Garageband. A full PDF manual is available at the Audio Damage website.

Discord4 consists of three separate algorithms: a "vintage" mode (the original Discord algorithm, modeled on the Eventide H910 and H949), a "clean" mode for more modern shifting sounds, and a "granular" mode for experimental effects. Each mode has its strengths, depending on the input material, and Discord3 has a broad palette of capabilities as a result. The P1 and P2 algorithms have full control over the buffer (window) size of the shift effect, for fine tuning the shift to the input signal, or for stranger sound effects. At the extremes of the six-octave shift range, some truly strange aliasing and artifacts can be had with this control.

Discord4 retains its pair of tempo-synced delays and bandpass filters from previous versions, and adds a reverb in the feedback loop (for easy access to "shimmer" effects). We have also replaced the modulation sources from the original with our all-new FLFO (Flexible LFO) design. Panorama controls are included to control the stereo width of the wet signal. Finally, soft saturation and limiting have been added or improved throughout the signal path, for an overall improved sound and added vintage-style warmth, and to allow for extreme feedback experiments without fear of overloading your DAW's channel.

• Buffer Size Control: The P1 (Vintage) and P2 (Clean) algorithms have a Buffer Size control, from 32 to 2048 samples, for fine-tuning the pitch shifting effect.

• Delay: Tempo-synced or free-running delays with feedback, cross-feedback, and a sophisticated bandpass filter.

• Reverb: A simple stereo reverb is added to the feedback path, for "shimmer" effects and further sound exploration.

• Modulation: Two of our new FLFO (Flexible Low-Frequency Oscillator) with tempo sync and an arbitrary waveform, capable of a nearly infinite number of modulation shapes using only three controls.

• True Stereo Operation: Discord4 has a true stereo signal path, with entirely independent control over each side, finishing with panorama settings for stereo width.

>> MIDI Input added. You can now use the MIDI shift feature just like the Desktop version; assuming your host allows MIDI to insert effects (many do not) you can assign a note MIDI input to Discord and "play" the pitch shift, just like the keyboard accessory for the H910. >> Full rebuild with all current SDKs and APIs. We had to refactor some things to bring Discord up to date and running smoothly.

To create Panstation, we started with a loose model of the venerable Drawmer M500's panning engine, then added the counting features from the Audio & Design PanScan (probably the most famous vintage autopanner, and the "secret weapon" of many well-known producers).

RoughRider3 is a dynamic compressor.

ChannelStrip is, as its name implies, a channel strip app and AUv3 plugin. With a gate, equalizer, and compressor, ChannelStrip can provide a solid and easy-to-use channel control for your iOS mixing needs.

Ratshack Reverb is a detailed model of that classic of classics, the Realistic Electronic Reverb. Now, you can have the sound of everyone's first analog delay unit, without ever having to change batteries!

Quanta is a six-voice granular synthesizer for iOS11+ in both standalone (with Inter-App Audio) and AudioUnit V3 formats.

ADverb2 is an accurate model of a vintage digital plate reverb rack unit from the 80s, with a few modern tricks up its sleeve.

Axon 2 is a drum synth driven by artificial intelligence. (Well, "intelligence" might be a strong word. Artificial something-or-other.).

Pumphouse is a sidechain pumping effect. It helps if your DAW doesn't have sidechaining.

One of the original buffer effects, and still one of the best, Replicant is essentially a randomized looper/buffer reverse, with a randomized stutter effect inside the loop.

This is a direct 1:1 port of Audio Damage's Eos 2 desktop plug-in, identical in every way to the Eos you know and love.