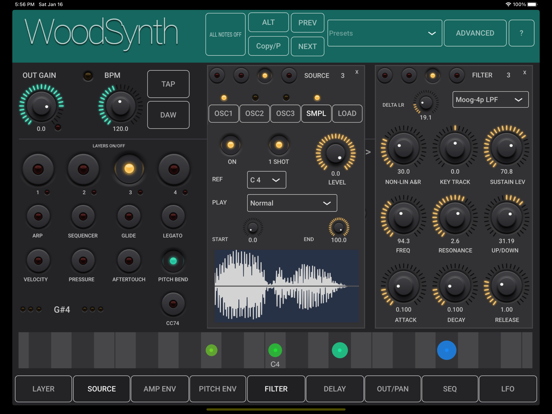 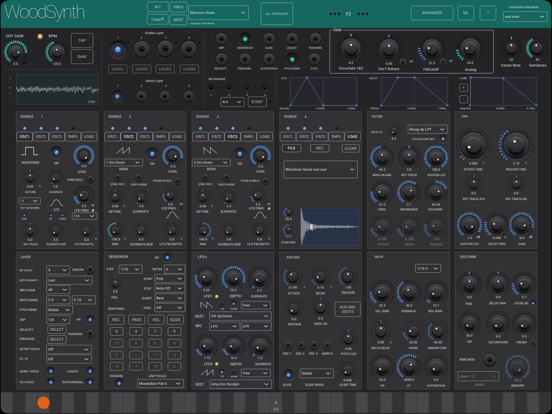 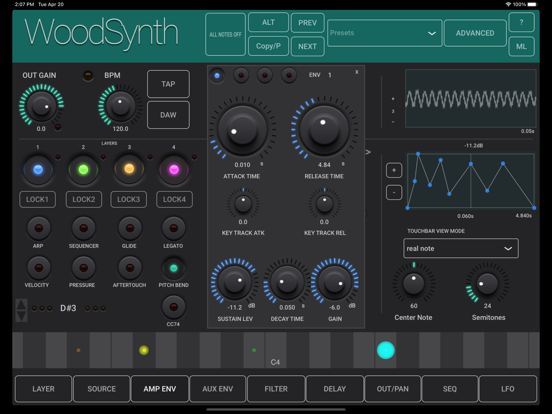 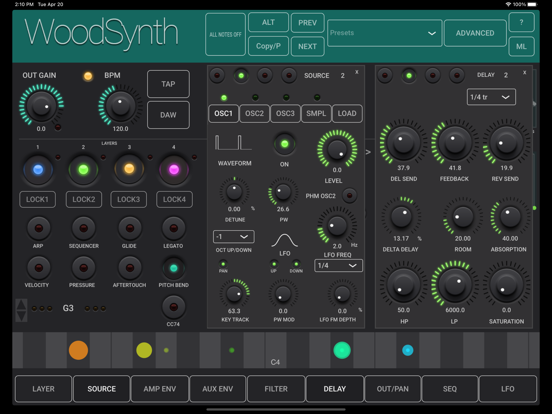 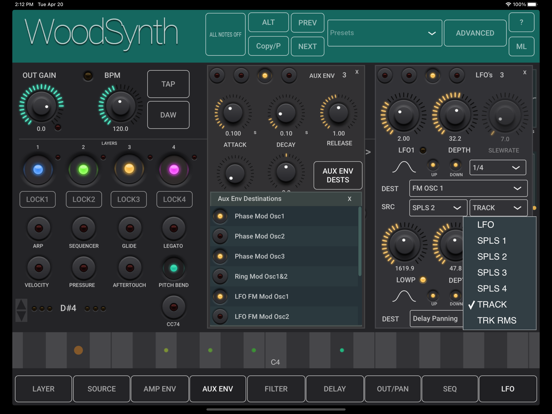 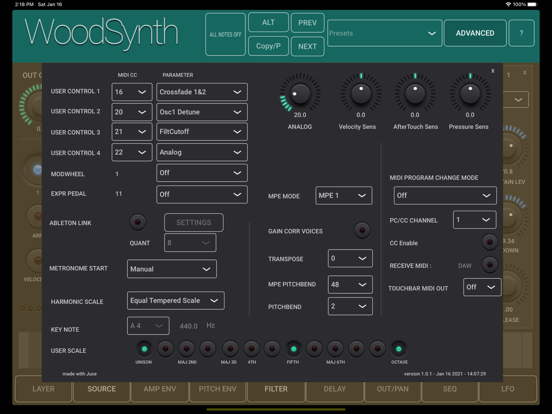 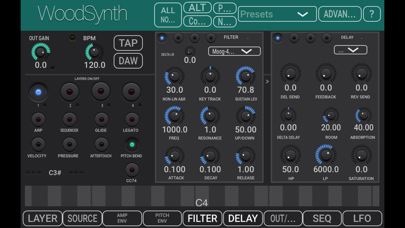 WoodSynth is a synthesizer with 4 independent layers. Each layer is in fact a synthesizer on its own.
Each layer has 3 VCO’s plus a samples or wavetable based source, coming from a file or from recording the audio track.
Up to 16 voices can be set per layer.
Layers can be used in parallel, assigned to a region of the keyboard or used in a sequential mode where the first note(s) on are played by layer 1 and the next note(s) by layer 2 and so on.
This last mode allows to have a different sound per note played (and independent from a keyboard region).
WoodSynth has a polyphonic pitch-bending touch bar which also displays notes received from a keyboard.
Each layer has its own filter and envelope with ADSR per voice, a pitch shifting envelope per VCO, a delay, a basic reverb, a modulator LFO per VCO, 2 general LFO’s and a 16 steps sequencer.
Key tracking can be applied on the ADSR attack and release, on the filter cutoff and on the VCO modulation.


The app can be used stand-alone (device audio input and output) or as a plugin in a DAW.


- IOS plugin type : AUv3 and stand-alone app.
- Has 4 independent synthesizers, each with up to 16 voices.
- Supports MPE.
- Has a polyphonic touch bar with polyphonic pitch bending.
- Velocity, channel pressure, (polyphonic) aftertouch, CC74 can be used to modulate several synth parameters.
- VCO’s have the usual waveforms (sine, saw, square, triangle, pulse and noise) and can be modulated in various ways (FM, AM, Pulse Width, Slew rate)
- Samples can be recorded from the audio input/track or loaded from file (sample files should be in the WoodSynth iCloud folder)
- Wavetables can be loaded from file or converted from loaded or recorded samples.
- Each voice has a 4-pole Moog Lowpass filter with resonance and ADSR envelope.
- An offset can be set in the Filter cutoff for the R channel to create a stereo effect.
- Each voice has a pitch shifting ADSR envelope which can be independently enabled for each VCO.
- Has Key tracking for VCO pan, Filter cutoff, ADSR Envelope Attack and Release.
- Each layer has a delay unit (which can be separately panned) and a basic reverb.
- Each layer has a 16 steps sequencer which can run on multiple voices (poly mode).
- Each layer can set the midi channel and range of receiving midi notes (which allows for up to 4 split keyboard regions).
- Layers can be set in sequential mode : first note(s) played on layer1, next note(s) on layer2, etc.
- Layers have an additional high-pass filter saturation and crush control.
- Synth audio and delay can be panned independently.
- The 2 general LFO’s can have their source from the samples or wavetables (or track input).
- Supports Ableton Link to sync tempo and start-stop.
- Has 4 User Control rotaries which can be freely assigned.
- The User Controls can be controlled by a midi CC which can be set or learned.
- Presets can be stored in iCloud Drive (makes them available on all your devices).

The WoodStepper is a sequencer having both audio and midi out.

The WoodLofier is both a standalone app and AUv3 plugin which combines 4 different sections to make your sound more lofi or to add some creative twist  : filtering (and Sample Rate reduction), a Tape wobble unit, Noise addition and Crushing (clipping, bit reduction and saturation).

The Wood'nGate is an audio gate which is both a standalone app supporting IAA (Inter-App Audio) and an AUv3 audio unit plugin.

Woodpressor is a high-end audio compressor. It is both a standalone app supporting IAA (Inter-App Audio) and an AUv3 audio unit plugin.