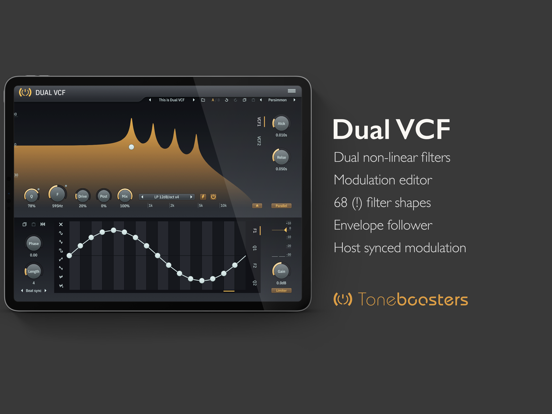 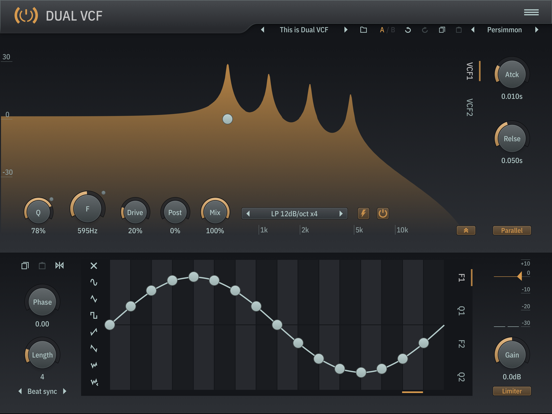 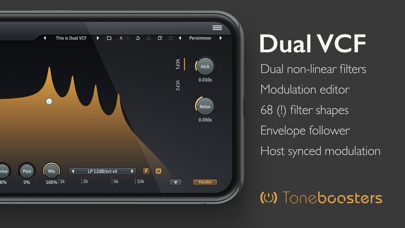 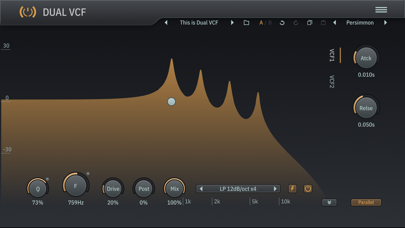 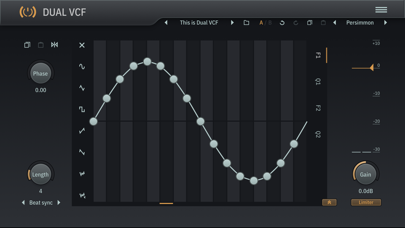 Each filter's cut-off frequency and resonance can be sequenced with an intuitive, free-running or beat-synced modulation editor. Seamlessly switch between sine, triangle, noise, or user-defined modulation waveforms. In addition, these parameters can also be modulated with the built-in envelope follower.

The ToneBoosters DualVCF app captures the microphone (or external sound card) input and processes the signals in real time. To use it as a plug-in, use an AUv3-compatible host app such as Steinberg Cubasis, Apple Garageband, Audio Evolution Mobile Studio, Auria, AUM, or others. ToneBoosters DualVCF will appear in the list of Audio Unit extensions for effect plug-ins.

How to use DualVCF as AUv3 plugin in a host program, start your favourite AUv3 host app (Steinberg Cubasis, Apple Garageband, Audio Evolution Mobile Studio, Auria, AUM, or others) and add TB DualVCF as Audio Unit insert effect to a track or output bus. See below on how to use Audio Units in various host apps.


What you should know:
- Inter-App Audio (IAA) can only use one instance of this app simultaneously. We recommend to use an AUv3 host to use multiple instances.
- Licenses acquired for this platform are not compatible with other platforms.
- Audio Unit (AUv3) extensions require an iPad mini 2, iPad 4 or later models.

How to use this app as AUv3 plug-in in Apple Garageband for iOS:
https://support.apple.com/en-au/guide/garageband-ipad/chse67d3af5f/ipadossteinb

How to use this app as AUv3 plug-in in Steinberg Cubasis for iOS:
https://download.steinberg.net/downloads_software/Cubasis/Cubasis_3_Web_Help/EF_Rack.html

How to use this app as AUv3 plug-in in Audio Evolution Mobile Studio for iOS:
https://www.audio-evolution.com/manual/ios/html/AudioUnitsandIAA.html

How to use this app as AUv3 plug-in in AUM - Audio mixer:
http://kymatica.com/aum/help#toc71

Thanks to it's true VA synthesis engine, the use of analog-modelled non-linear filters and extensive modulation options, Flowtones sounds warmer and more analog than digital romplers and wavetable-based synths.

BitJuggler is an audio plugin to simulate vintage digital processing and to recreate digital imperfections.

ToneBoosters Compressor is an AUv3 plugin for mastering-grade compression and dynamics processing.

ToneBoosters Morphit is an AUv3 plugin for headphones correction and simulation and removes any unwanted coloration from your headphones!

ToneBoosters Enhancer is an enhancer, exciter and sweetener plug-in.

ToneBoosters ReelBus is a magnetic tape simulation plug-in for iOS or iPadOS device.

ToneBoosters Barricade is a peak limiter and compressor.