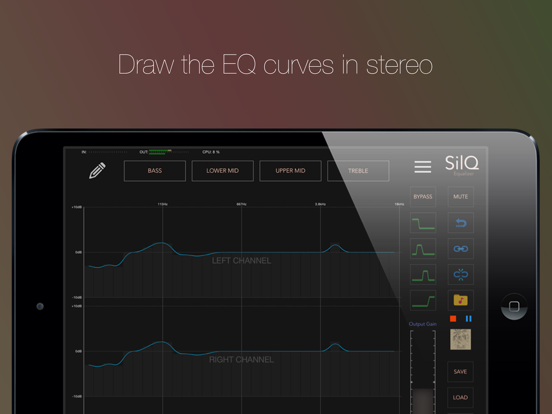 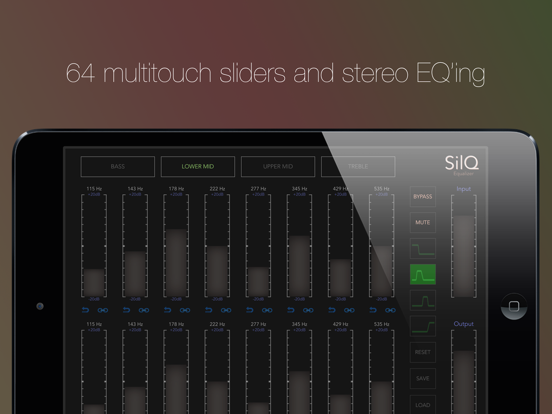 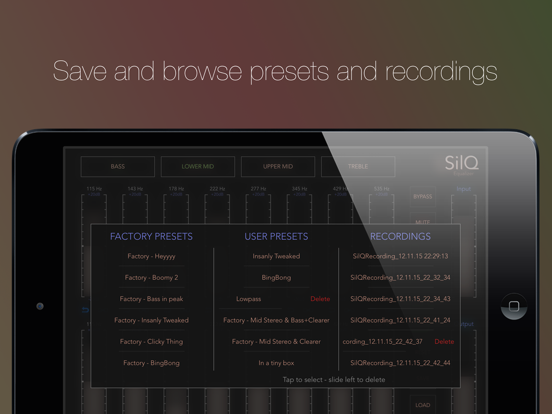 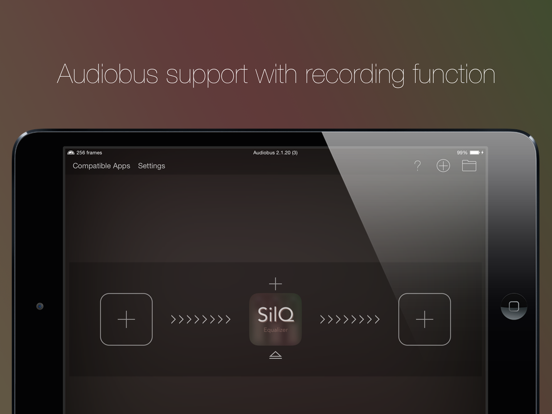 SilQ Equalizer is a high quality 32 band stereo equalizer supporting a great variety of audio inputs (including built-in microphone or hardware) as well as acting as an effect app through IAA and Audiobus.

SilQ Equalizer is a sophisticated, high quality 32 band stereo equalizer supporting a great variety of audio inputs (including built-in microphone or hardware) as well as acting as an effect app through IAA and Audiobus.

You can also use SilQ Equalizer to improve the sound of you own Music Library!

Use SilQ Equalizer to get the feel you want from your track or mix and hit the 'RECORD' button to save the sound that you hear for later use.

Maybe you need an easy-to-use equalizer in your live setup?

The audible frequency spectre is divided into bands with 8 right/left sliders on each view. All center frequencies can be adjusted +/- 20dB.

*** Copy protected audio is not possible to play inside SilQ. Also, the Music Library Player is disabled when interacting with other apps through IAA or Audiobus

This app has been updated by Apple to display the Apple Watch app icon. Introducing the drawscreen! Draw the entire 32 band EQ curve in one screen and work out details on the faders as before. Unlink the curves with a simple click to have two separate 32 band curves, in stereo. Show the EQ curve in 3 different scales (-6/6dB, -12/12dB & -20/20dB) Also: - Improved monitoring and CPU usage - Bypass-screen - Adjustments on the user interface - New user manual - Minor bug fixes

A guitar app. Playable user interface with access to hundreds of chords that can be visualized just as they would be played on a real guitar.

With GuitarCapo, playing guitar and learning chords turns into a breeze. With simple clicks you can discover the most unique chords. In addition, you can use the built-in capo to transpose chords — just like on a real guitar!