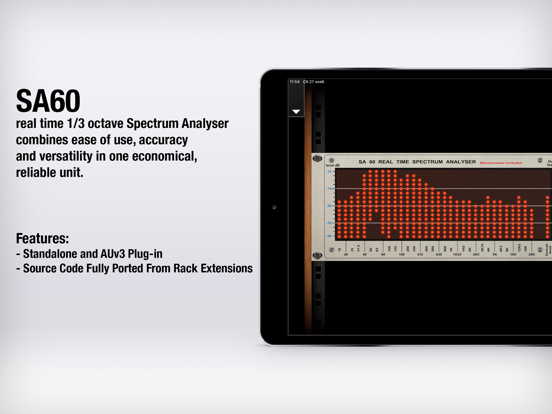 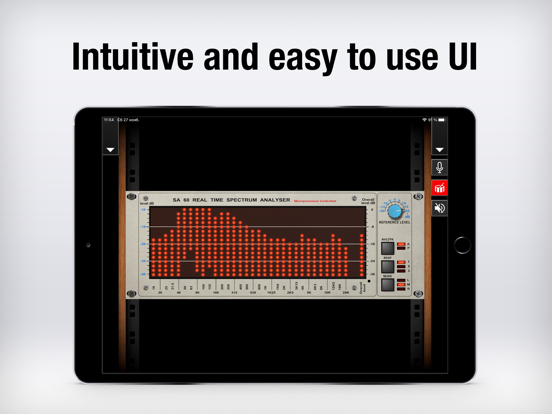 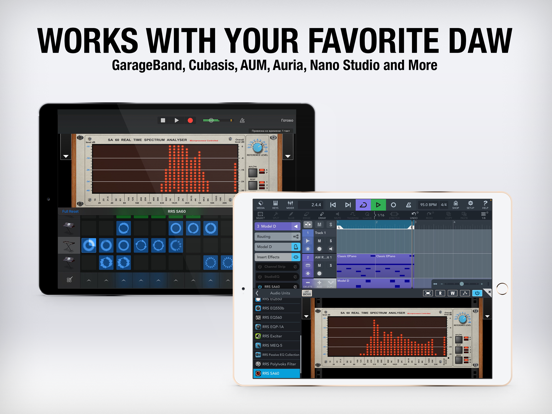 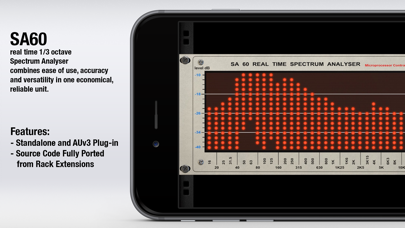 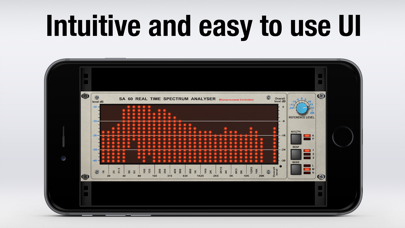 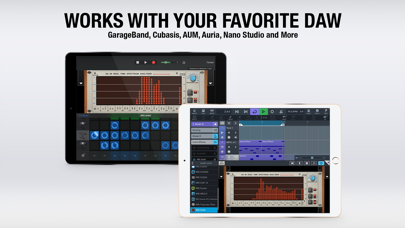 • DISPLAY LEVELS — Relate to the Reference level, calibration of a display level is read from graticules on the left of the display window;
• REFERENCE LEVEL — The absolute level to which display readings are relative, i.e. calibration, is given in dB;
• OVERALL LEVEL — Calibration of the overall level is similary derived from graticule to the right of the display. Note: this graticule applies to the overall level only!
• AVG/PK — Two leds indicate whether the display is Averaging or Peak-reading;
• RESP. — Speed of display response is selectable: «1» — Fast, «2» — Medium, «3» — Slow (shown by three leds);
• MODE — Controls the display mode: «L» — Left, «M» — Mid, «R» — Right.

To use SA60 as a plug-in, you need an AUv3-compatible host app like GarageBand, Auria, AUM, Cubasis and more — SA60 will appear in the list of Audio Unit extensions for effect plug-ins in the host app.

The MEQ-5 based on Classic Mid-Range Equalizer from the '70s, with two bands of midrange boost and one band of midrange dip, the MEQ-5 gets the very best out of the «power region» where guitars and vocals can make or break a mix.

The Red Rock Sound Exciter will allow you to improve and enhance sonic quality of signal more naturally than with equalization. Unlike traditional EQ that just turns up the existing harmonics, Exciter generates additional harmonics, therefore there is no boost in the output signal level, this maintains a clear and balanced sound.

Does your bass sound dull and lifeless? Red Rock Sound Bass Enhancer will be your choice to correct this deficiency. Bass Enhancer designed for saturation harmonics of low-frequency, it creates the effect of lower, deeper frequencies. This effect can not be created with simple equalization.

In the '80s it was the first to use a different approach to tonal adjustments. In conventional analog equalizers, whether they are shelving, sweepable, graphic or parametric types, various sections of the audio spectra are boosted or attenuated by adding or subtracting bandpasses. In this case, frequency shaping is achieved by summing bandpasses.

Based on Classic American EQ from the late '60s, the EQ550b is a continuation of the EQ that played a major role in the history of music recording, but with an additional filter band and several new frequencies.

The EQ550 faithfully captures the punch, low-frequency transparency, and ultra-tight imaging of iconic American EQs of the late 1960’s.

The EQ-A based on Classic British EQ from the '70s. With a wide range of tonal variations, the EQ-A is an audio tool with great flexibility and sonic ability.

The EQ560 extends the features of the original hardware and joins the flexibility of the digital world to the character of the analog processing.