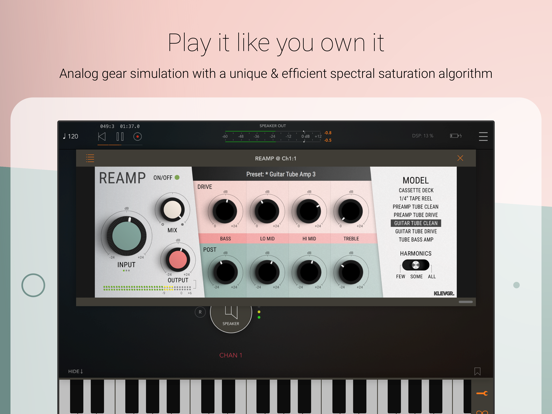 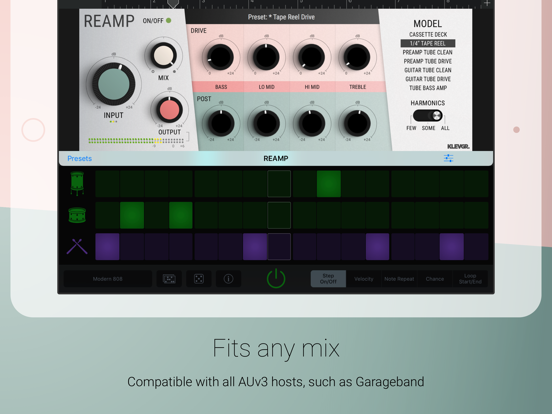 This AUv3 plugin effect is a complex spectral saturation processor simulating a set of different analog gear in a new and unique way.

This AUv3 plugin effect is a complex spectral saturation processor simulating a set of different analog gear in a new and unique way. Benefits of this algorithm is that it is highly CPU efficient and adds (almost) no latency.

The 7 models available are based on real analog gear individually measured in two dimensions; gain responses (-inf dB to +6 dB) at the frequency spectrum 20Hz to 20kHz. This data is used to transform input audio to output audio.

A consumer cassette deck produced in the mid 80’s. This profile adds some nice grit in the lower mids and rolls off the higher spectrum in a very pleasant way.

A high quality tape reel machine was used for this profile. Set to one channel mode, there was plenty of dynamic bandwidth to capture on this one. Adds some subtle tape saturation that oozes mid 70’s.

These two profiles are captured from a high end tube microphone preamp with two different input gain levels (normal gain on the Clean version and a boosted level on the Drive version). Used on only one channel, this profile is very subtle, but the impact adds up when several channels are used simultaneously.

The guitar amp used is a well known pro amp used by several pro guitar players, and Just like the Preamp Tube profiles, these are recorded with two different input gain levels.

One of the developers friends dad had an old bass amplifier that we borrowed and profiled. Tip: Run a Fender Jazz bass through it and your neo soul licks will sound just like they’re supposed to.

Since there are several models available, this one can be used on almost any type of audio in any genre. The output can span from lo-fi to high-end hifi. One approach is to put it on several tracks with a more subtle setting which makes the essence of the gear simulated add upp. Another is to put it on the mix, or a bus.

Since we’re in the digital domain there can be some added aliasing when distorting the signal too much, resulting in an unpleasant high frequency boost. To prevent this, set the HARMONICS switch to SOME or FEW.


Full documentation available inside the app or at https://klevgrand.se/downloads/reamp-docs/

NOTE! REAMP is an AUv3 plugin that only works in an AUv3 compliant host like Garageband, AUM, Cubasis, Beatmaker 3, Auria etc.

Spinn is a 4 band rotating modulation effect. It’s a bit similar to a Leslie but not aiming to replicate this character. 4 rotors with individual speed controls, acceleration and deceleration times, adjustable size and modulation.

Ting provides 12 different percussive sounds originating from t(h)ings that can be found in most of ordinary households.

LUXE is an AUv3 effect plugin that compress and saturate an audio signal in a quite subtile but musical way. It's very useful for making a track "fit in the mix" and can be used on anything from a drum bus to a vocal track.

Knorr is a plugin that adds intensity and edge to a monophonic low frequency audio source (like a bass). The algorithm adds overtones to an existing sound in a way that isn’t possible with ordinary distortion or filtering.

Haaze is a 16 band stereo widening tool that utilizes three different methods of controlling the stereo width and spatial positioning of an audio stream.

STARK is a fully fledged amplifier simulator consisting of four modules: Amplifier, Cabinet, Room and effects slots. These modules are processing audio separately, which makes it possible to combine different amplifiers with different cabinets and rooms.

Kleverb is an algorithmic reverb effect.

Degrader is a combined resampler and bit crusher AUv3 plugin.

Shape your sound with advanced equalising to make your tracks fit in the mix.

DAW LP is an Audio Unit effect that emulates the sound of a vinyl disc (and player).

DAW Cassette is an Audio Unit effect that emulates the sound of a classical tape deck.

Svep is a stereo modulation filter effect suitable for any sound. Tweak it to produce anything from old-school phasers to subtle choruses.

This audio effect is an advanced de-esser with an intuitive user interface.

Baervaag brings FM synthesis to the masses! An easy to use but still tweakable synthesizer, accessible to everyone.

Syndt is a polyphonic synthesizer with a lot of possibilities.

This synthesizer offers a brand new way of finding the optimal sound.

Brusfri* is a highly advanced audio noise reducer, packed into a simple and straight-forward interface.

This synthesizer emulates male voice vowels in a unique way.

Haaze provides two different ways of making a mono (or a not-wide-enough-stereo) signal to a wider stereo signal.

Vandelay provides three separate delays in as many frequency regions. Each delay has an LFO that modulates the pitch of the audio stream.

This audio effect filter is a hybrid between a simple reverb and a very complex delay.

Pads is basically a wavetable synthesizer with a noise/grain generator and a high cut filter.

PressIt is a multi-band compressor for the professional audio engineer.

Korvpressor is an adaptive compressor/limiter with an easy-to-use interface.