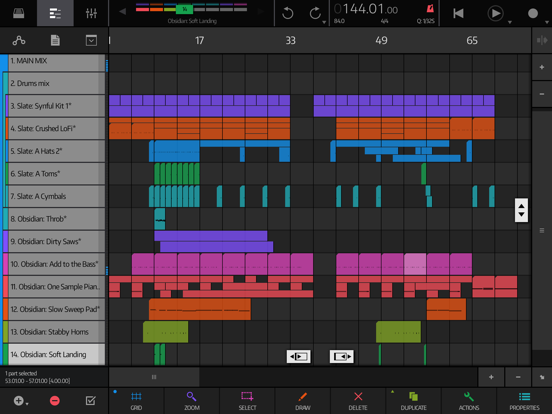 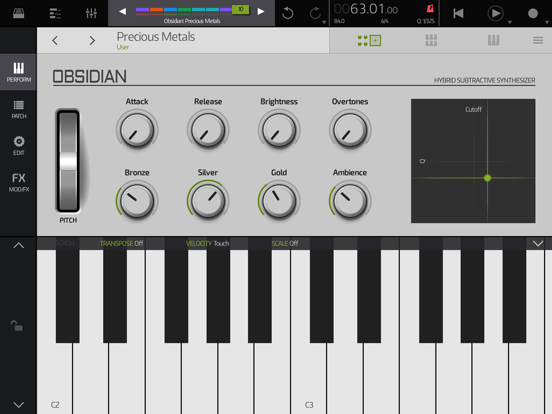 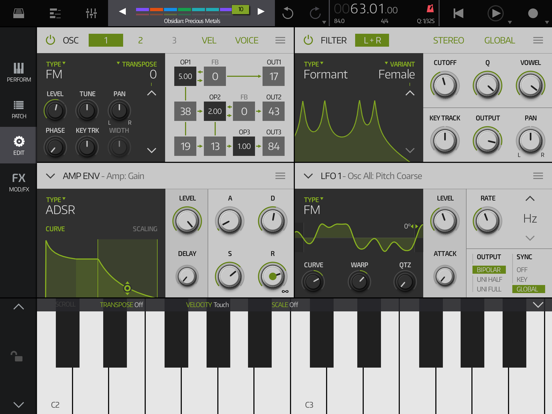 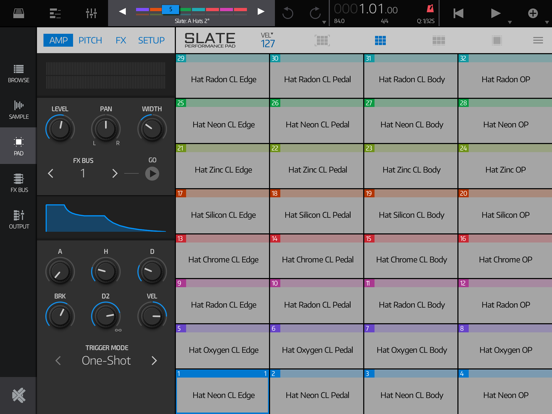 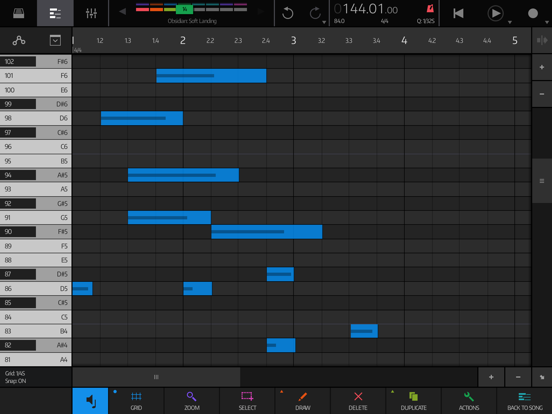 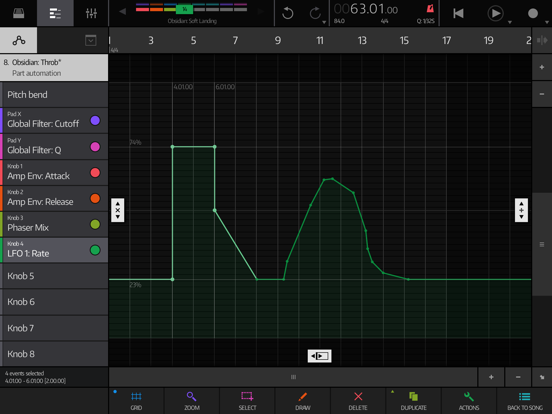 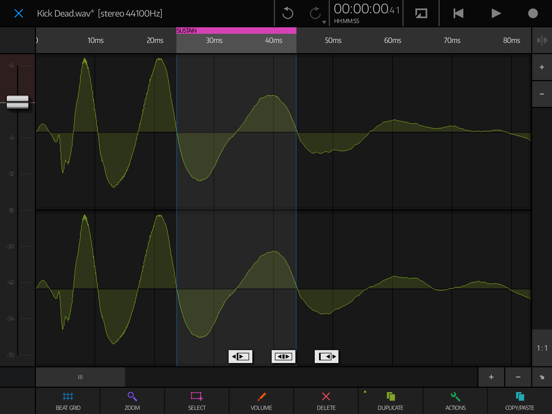 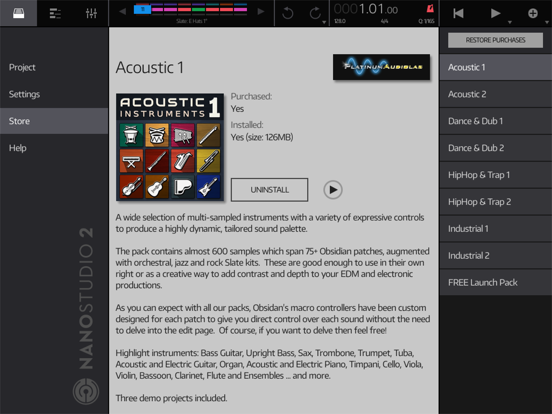 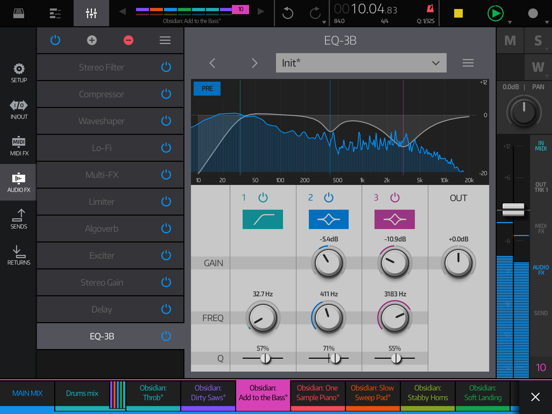 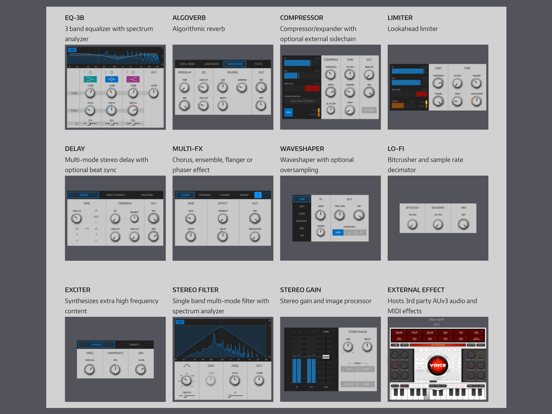 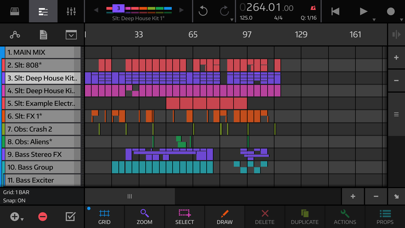 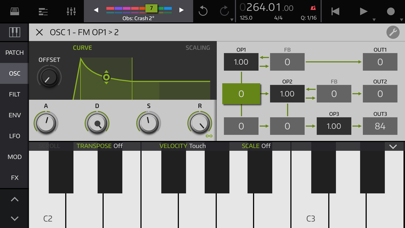 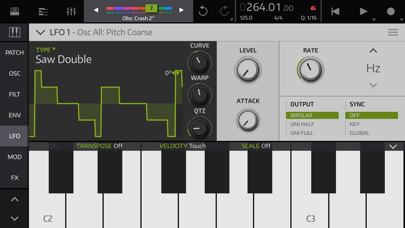 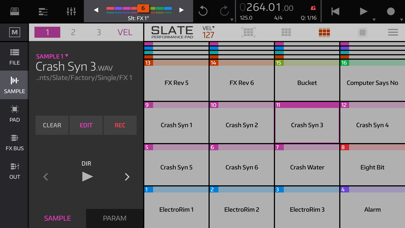 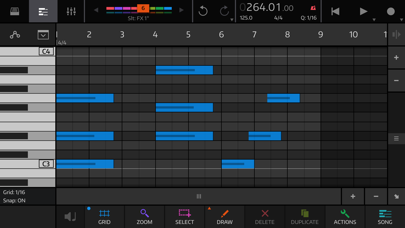 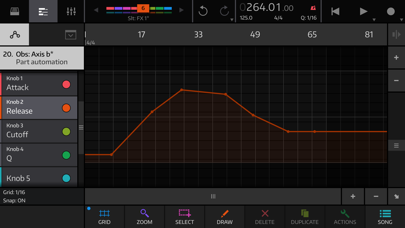 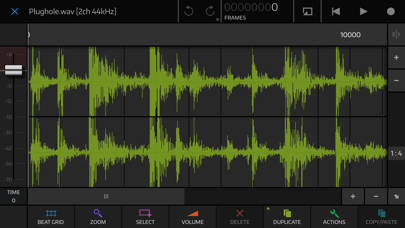 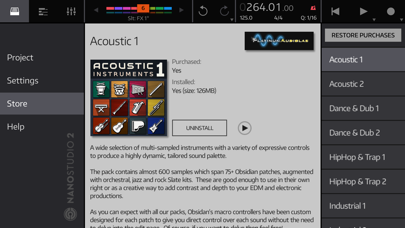 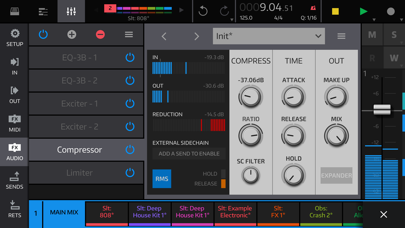 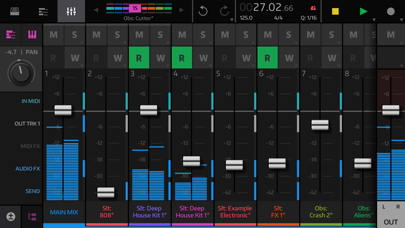 NanoStudio 2 is a powerful music production environment for synthesis, sampling, arranging, editing and mixing. It’s the successor to the original NanoStudio, an app held in high regard by musicians for many years for its usability, quality and productivity.

NanoStudio 2 builds upon the same design principles as its predecessor and introduces a huge range of extra features.  An all-new audio engine delivers truly professional sound quality, highly optimized to handle complex projects with large numbers of instruments and effects.

NanoStudio 2 hosts external Audio Unit (AUv3) instruments and audio/MIDI effects.  A library of all your AU instruments and presets is maintained so they’re tagged, searchable and just as accessible as NanoStudio’s own internal instruments.

Obsidian is NanoStudio’s built-in synth.  It has 3 oscillators with 32 note polyphony and 7 different synthesis methods including analogue, wavetable, FM, multi-saw and phase distortion.  It also supports samples and multisamples which may be split by note or velocity. Obsidian has 18 different filter types, including resonant analogue, super clean digital, formant, comb and waveshaping. Nearly every parameter can be modulated via the synth’s 5 envelopes, 5 LFOs and 10 configurable macro controllers, and modulation connections can be assigned with just a few taps.  300 factory patches are supplied with macros set up and ready to go.  It’s easy to create your own patches and there are many more professionally produced patches available as IAP.

Slate is NanoStudio’s second built-in instrument, a sample/synthesis-based performance pad which makes it easy to tap out drum beats.  Slate comes with 500 quality factory samples ranging from multisampled acoustic drums with natural variations through to cutting-edge electronic percussion and effects. 50 factory kits are include, and it’s easy to construct your own drum kits using the factory samples or your own. Slate can also be used with samples of just about anything: vocals, guitar riffs, synth pads – you name it.

There are powerful editors for song arrangement, MIDI, automation and samples.  All share a consistent user interface so you’ll be up to speed with them and making music in no time.

Everything’s brought together by a mixer with unlimited tracks, track grouping and audio/MIDI sends.  Tracks may have an unlimited number of insert effects with 11 built-in effects to choose from including reverb, sidechain compressor/expander, EQ with spectrum analysis, look-ahead limiter, delay, exciter, chorus, flanger and phaser.  You can add AU audio/MIDI effects to the chain and use them just like an internal effect.

There are many mixdown options available with quality settings up to 32 bit/96kHz and support for file formats including wav, aiff, ogg and M4A.  You can mixdown track stems in a single operation or select just a region of the song - great for resampling.

NanoStudio supports Audiobus and has many options for file sharing via the iOS Files app, Dropbox, AudioShare, iTunes File Sharing, AirDrop, email, WebDAV and importing music from your iTunes library.

Develop your initial musical ideas through to a final master with an intuitive workflow designed to get things done.

NanoStudio 2 is now universal - you can use it on iPhones and iPods! Obsidian - Increased maximum polyphony from 16 to 32 Song Editor - Fixed a bug (introduced in the last update) where splitting parts could leave superfluous notes with a very short duration just before or after the split point - Improved interpolation of automation curves when joining/splitting parts Sample Editor - 'Save as' dialogue defaults to the last used folder location Mixdown - Added option to wait for AUs to load resources - fixes AUs which are silent during mixdown. General - Increased sustain pedal polyphony - iOS 13.x: Fixed crash when Bluetooth MIDI connection dialogue is shown - AbletonLink SDK updated to 3.1 - Audiobus SDK updated to 3.0.9

NanoStudio is a recording studio for iOS, OS X and Windows.  It has virtual analogue synths, sample trigger pads, a comprehensive sequencer, a sample editor, a mixer and multiple effects all integrated into a single application.