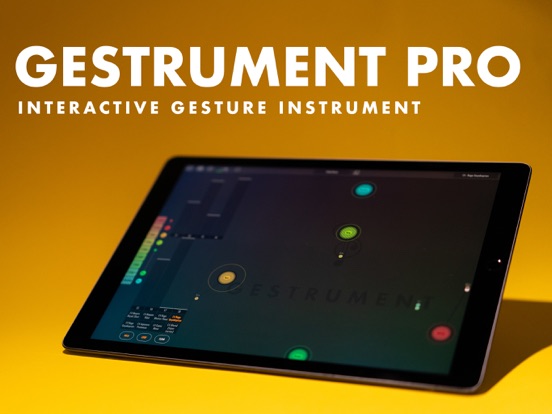 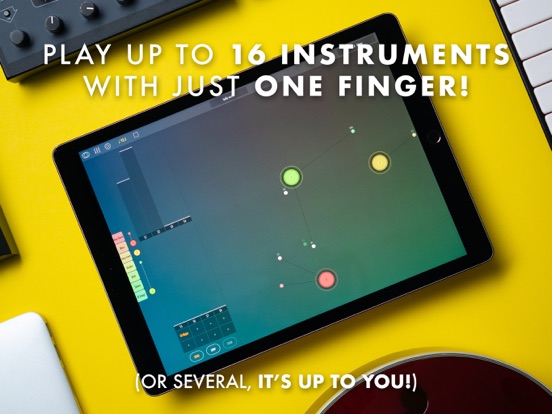 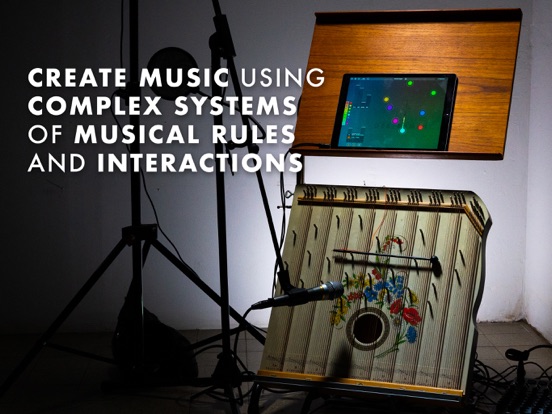 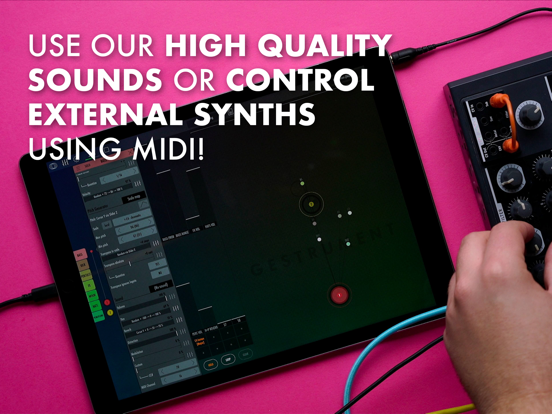 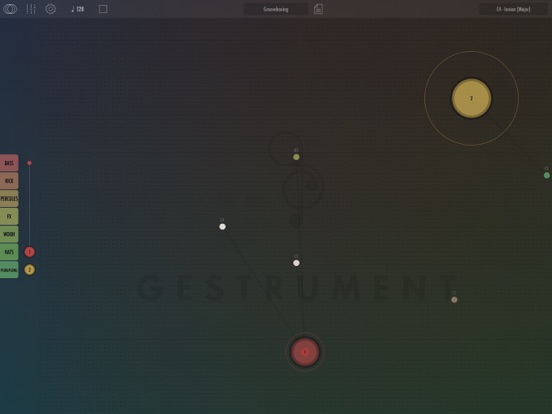 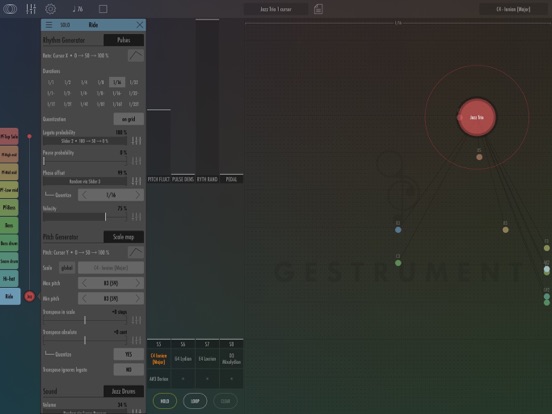 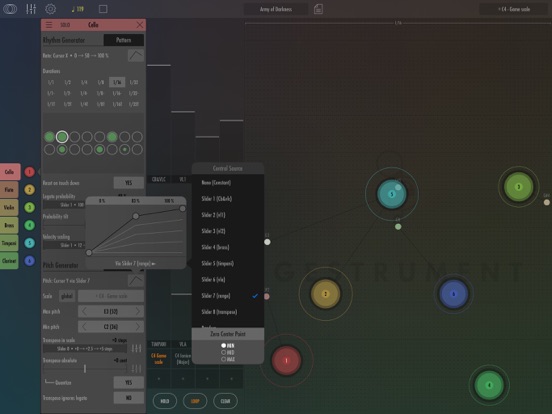 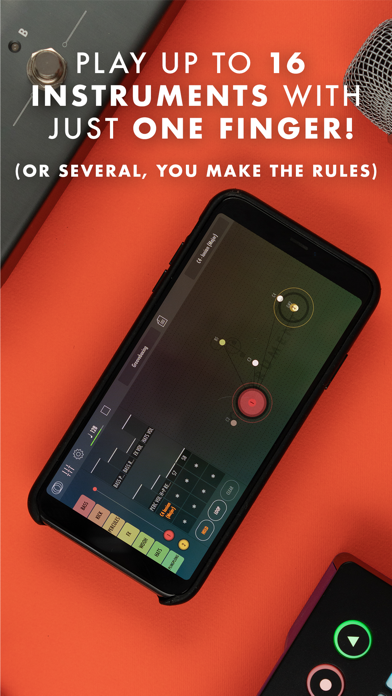 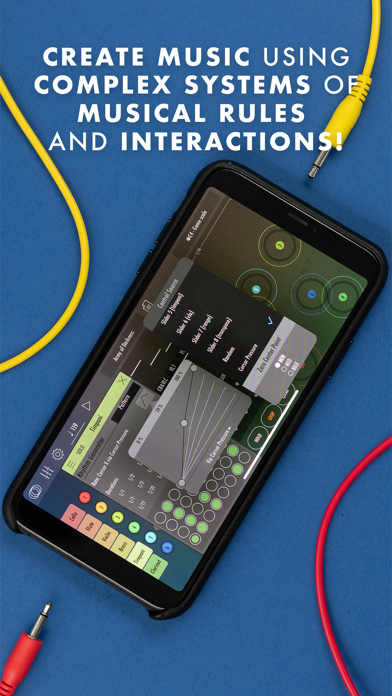 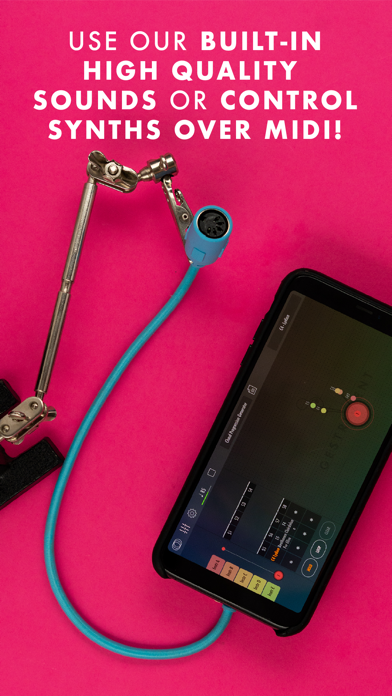 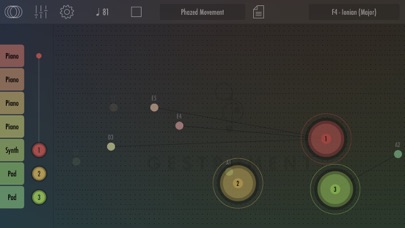 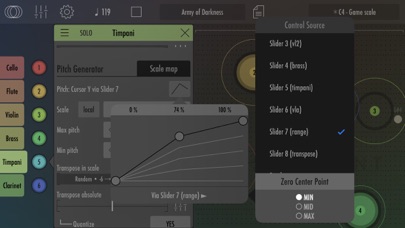 Gestrument Pro takes everything we loved about Gestrument and improves on its original functionality while introducing a host of new features such as multi-touch, recordable automations, advanced scale editing and our unique system of highly tweakable modular generators that define the pitches and rhythms.

The Interactive Gesture Instrument
Create music based on complex systems of musical rules and interactions. Using the motion of your fingertips, Gestrument Pro lets you play, improvise and compose with deeper levels of personal expression than ever before.

Play your music your way
Gestrument Pro lets you create something in-between a bespoke instrument and written piece of music. In other words, it’s an instrument made to play your own music in your own way.

Widen your musical comfort zone
Experiment with simple and advanced musical concepts such as microtonality, polyrhythms and much more using our modular system of highly tweakable musical generators.

A next level Improvisational tool
By building patches based on the musical rules and properties of your own music, Gestrument Pro lets you improvise to it in real-time. Our Pitch and Rhythm generators make sure you’re always on time and always on pitch, no matter how you play.

Powered by the Gestrument Engine
Gestrument Pro is completely powered by our revolutionary Gestrument Engine, a system for generating music based on user interactions in real-time. Want to know more about this? Visit gestrument.com/engine

Based on the revolutionary Gestrument app from 2012, award-winning composer Jesper Nordin and leading iOS developer Jonatan Liljedahl (Kymatica) have completely re-invented their unique instrument and taken the concept to the next level.

Gestrument PRO takes everything we loved about the original Gestrument app and improves on its unique functionality while introducing a host of new features such as multi-touch, recordable automations, advanced scale editing and a unique system of highly tweakable modular generators that define rhythms and pitches.

• Powered by the Gestrument Engine.
• Up to 16 individual Instruments.
• Each Instrument can be controlled by any of up to 8 Cursors.
• Instruments can use internal high quality sounds or play other synthesizers or apps via MIDI.
• Modular swappable Generators for producing the rhythms and pitches per Instrument, each with their own set of tweakable parameters and settings.
• 8 performance sliders that each can control one or more parameters in the Instruments and their Generators.
• A highly flexible modulation system allows assigning Sliders and Cursor position/pressure to any parameter in the Instruments.
• Advanced microtonal Scale editor with several standard scales included.
• 8 Scale Slots for fast switching between scales and tonalities during performance.
• Sliders, Cursors and Scale Slots can be recorded into automated loops, or controlled via MIDI. They can also send MIDI.
• Supports Inter-App Audio and Audiobus, including host sync for following the hosts transport and tempo.