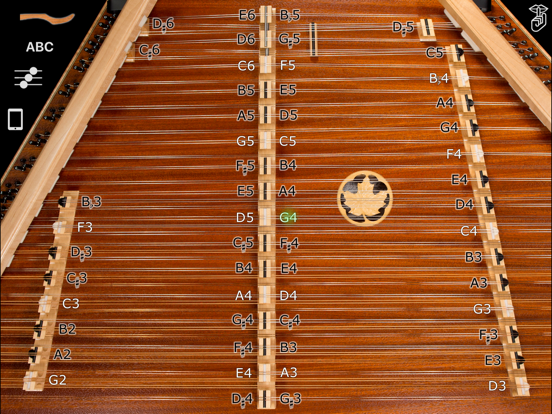 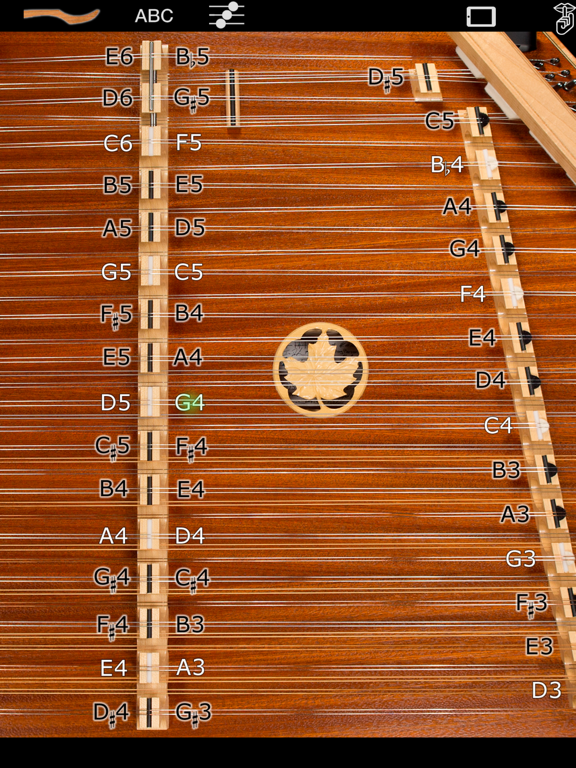 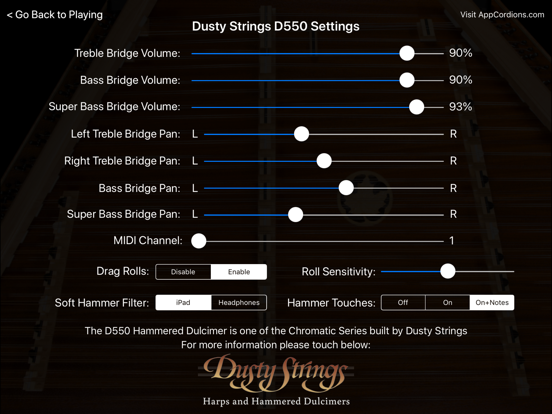 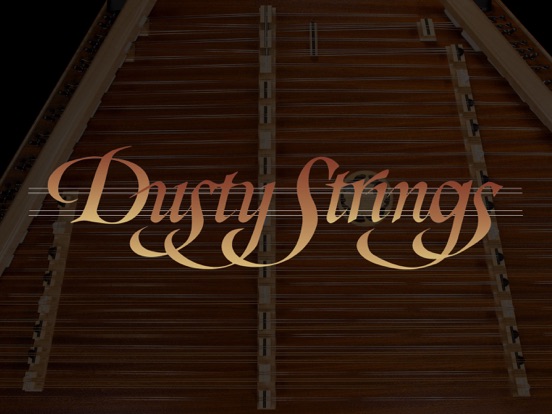 This virtual dulcimer sounds and plays like the real thing!

The D550 is one of the popular Chromatic Series models made by Dusty Strings, builders of hammered dulcimers in Seattle, WA since 1979.

This model features standard fifth-interval hammered dulcimer tuning, plus an extended bass range (down to G2) and some additional chromatic notes to enable playing in any key.

The overall range is 3.75 octaves, with a fully chromatic range of 3.5 octaves.

To play, just touch the strings next to the black and white bridge markers. The Treble bridge (in the middle) has playable notes on either side, which are a fifth interval apart.

Toggle between a bright, clear ringing tone using hard hammers and a gentler, more piano tone using soft hammers by touching the image of the hammer in the upper left corner.

To get repeated note "drag roll" effects, drag quickly horizontally across the strings. The drag roll sensitivity can be set on the settings screen. The higher the sensitivity, the shorter distance you need to move your finger to get the effect.

Touch the ABC button on the upper left area to toggle the note names on/off.

Touch the iPad icon on the playing area controls to toggle between "Full" and "Treble/Bass Bridge Only" style instruments.

"Full" provides the full D550 instrument including the Superbass bridge.

"Treble/Bass Bridge Only" focuses on the treble and bass bridges and provides the maximum string spacing for easier play on smaller screens like the iPad Mini.

Touch the mixer icon on the upper left area to show the controls screen where you can adjust the balance and pan for the bass and treble bridges, enable or disable the drag rolls, as well as set the sensitivity for how far you need to drag to get the roll effect.

On the iPad Pro, with its amazing stero speakers, set the "Soft Hammer Filter" to "Headphones" for best quality sound when playing with the soft hammers.

From the controls screen you can also visit the Dusty Strings website to learn more about their amazing hand-crafted instruments.

Touch the "Shhh" icon on the upper right corner to quiet all the strings.

The app may be used as a MIDI sound module for use with CoreMIDI-enabled MIDI file player apps or controlled from an external MIDI keyboard using a hardware MIDI interface.

Select the MIDI channel on the controls page.

When used via MIDI, the app responds to MIDI note-on (with velocity), note-off, and volume change messages on the selected MIDI channel.

The treble bridge volume and panning is used for all MIDI sounds and will respond to MIDI volume messages.

The app is also a Audiobus compatible source module.

To truly experience the full stereo spread of the instrument, plug in a set of headphones or amplified speakers. If plugged in, switch the "Soft Hammer Filter" setting to "Headphones" for the fullest possibly sound when playing with the soft hammers.

This app has been updated by Apple to use the latest Apple signing certificate. Name changed to "Dusty Strings D550 Dulcimer" Bug fixes and performance improvements. The app may now be used as a MIDI sound module for use with CoreMIDI-enabled MIDI file player apps or controlled from an external MIDI keyboard using a hardware MIDI interface. When used via MIDI, the app responds to MIDI note-on (with velocity), note-off, and volume change messages on the selected MIDI channel. Select the MIDI channel on the controls page. The treble bridge volume and panning is used for all MIDI sounds and will respond to MIDI volume messages. Fixed a rare issue that may have caused the sound to stop when used as MIDI sound module in the background. Volume sliders now show a full range from 0 to 100% The app also works as an Audiobus source module.