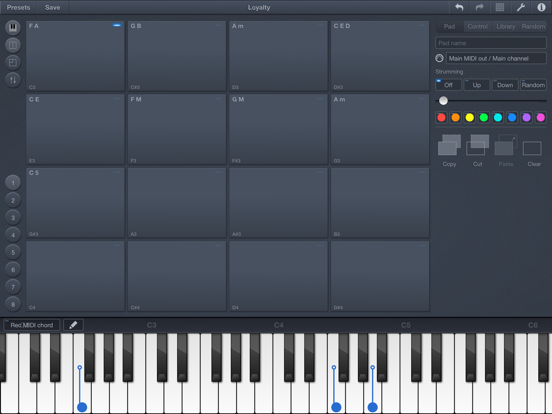 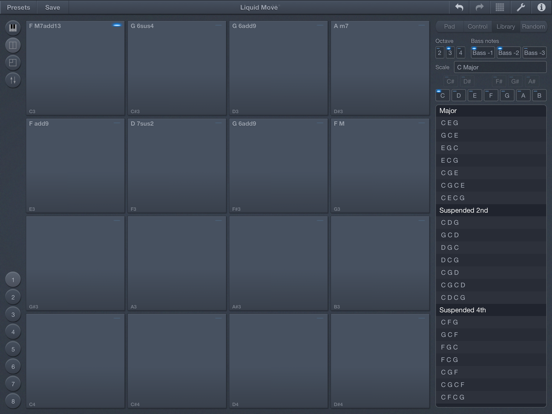 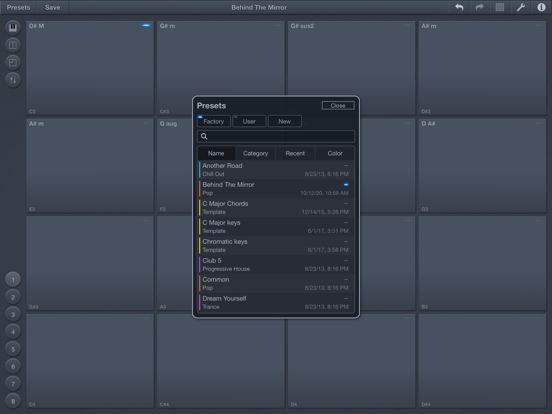 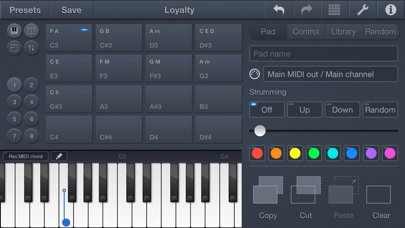 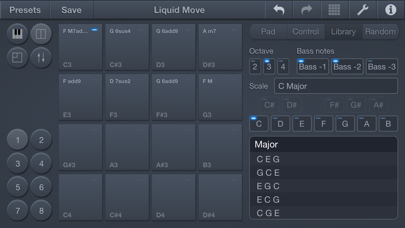 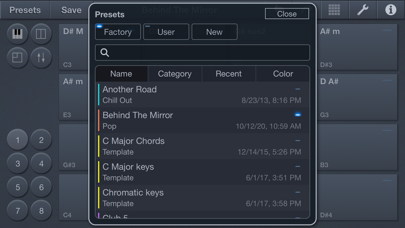 ChordPolyPad is a chords player for Midi instruments, sequencers or virtual instruments installed on the same iPad.

"ChordPolyPad" is a MIDI chords player that allows you to create chord sets from a large internal library, from any combination of notes, or from chords generated randomly. Each set consists of 8 groups of 16 pads, or 2 groups of 64 pads.

In addition to play chords, each pad can generate customizable MIDI controls on its horizontal and vertical axis.

It can be used as a standalone application or an AUv3 MIDI effect plug-in.

The application supports full internal and external MIDI connections for input and output. An internal sound bank is included.

• Standalone application and AUv3 MIDI effect plug-in
• 8 groups of 16 pads or 2 groups of 64 pads by preset (128 pads)
• MIDI port and MIDI channel assignable for each pad
• Customizable X/Y controller for each pad
• Velocity assignable for each chord note
• Strumming setup by pad
• Copy and paste for pads and groups
• Draggable chords directly from library
• Searching for chords available in a defined scale
• Random chords for instant inspiration
• Multitasking
• Internal sound bank
• Receiving MIDI notes and control from external devices
• Send MIDI to a virtual port that can be used as MIDI input by other "Core MIDI" compatible applications
• Presets manager
• "Program Change" support
• Preset sharing support by "AirDrop", "Mail", "Message" and other available services
• Native iCloud support
• "iCloud Drive" support in "Files" app on iOS and in "Finder" on macOS
• Full support of "Split View" and "Slide Over"
• Undo/Redo

"QuantiChord" is a MIDI effect that generates chords from incoming notes and quantizes the results to a pre-defined scale. It can be used as a standalone application or as an Audio Unit MIDI effect plug-in.

"StepPolyArp Unit" is a real-time polyphonic and polyrhythmic MIDI step arpeggiator and step sequencer. It can be used as a standalone application or an Audio Unit MIDI effect plug-in.