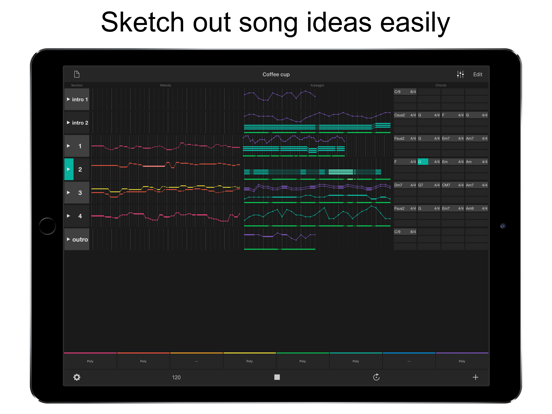 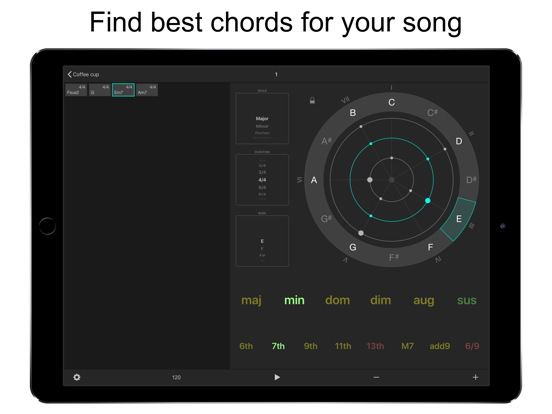 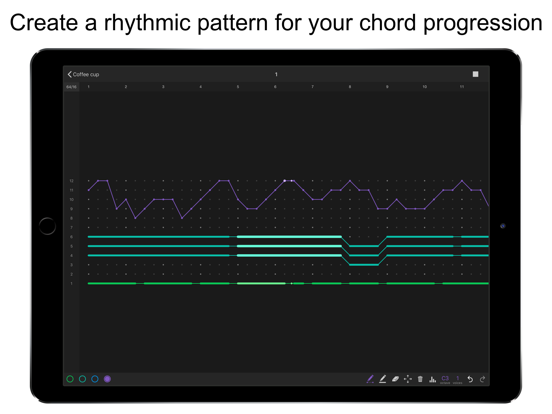 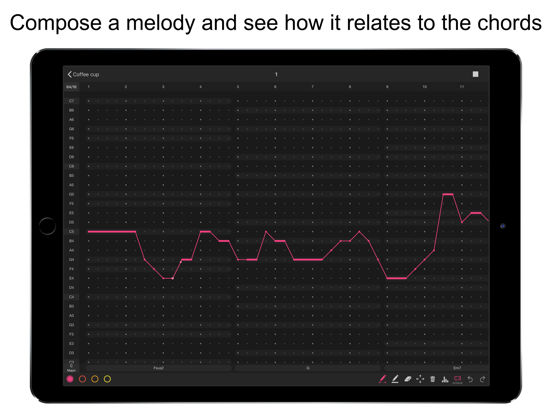 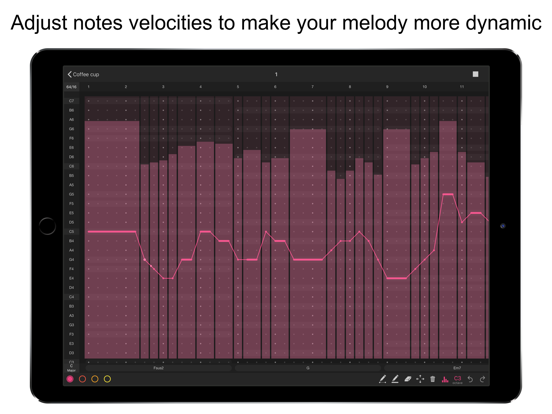 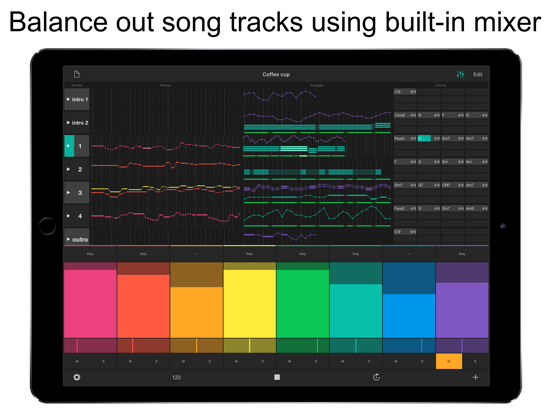 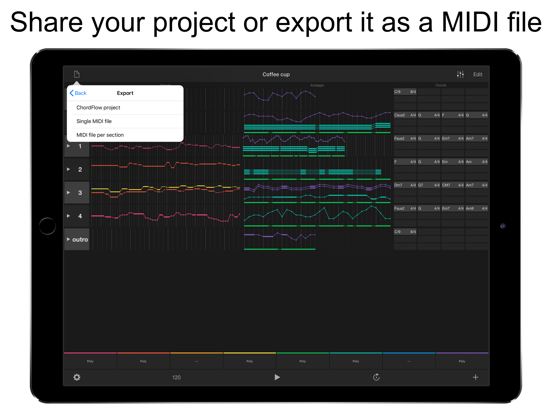 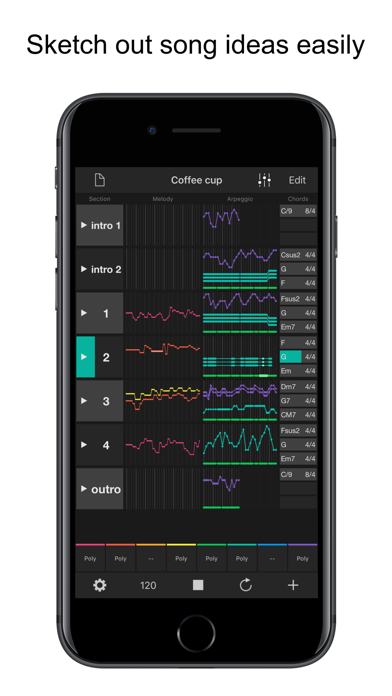 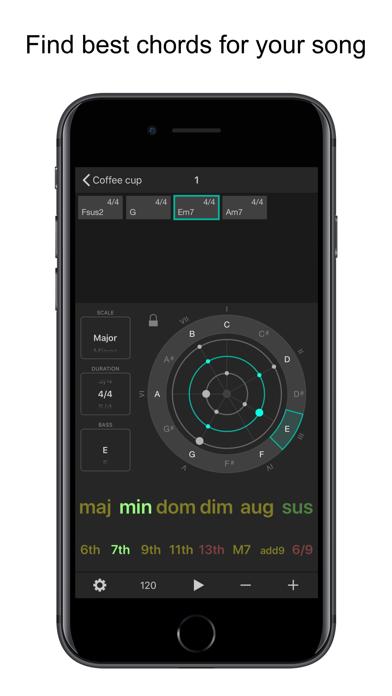 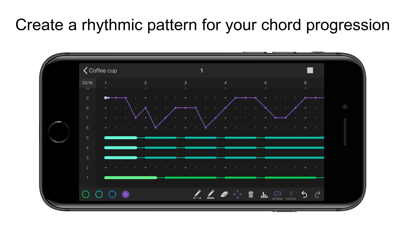 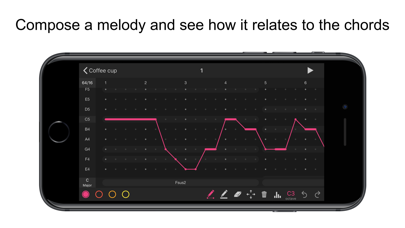 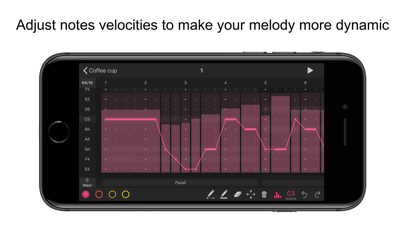 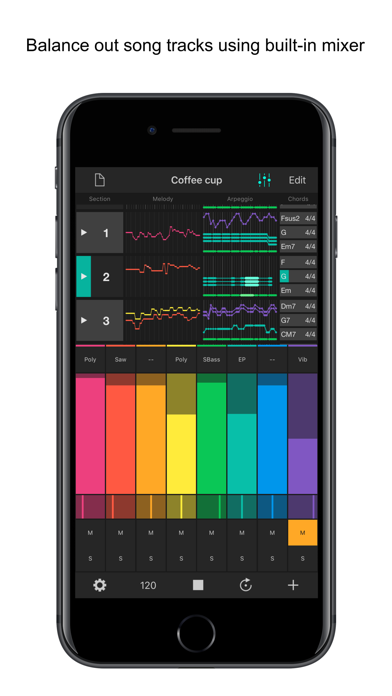 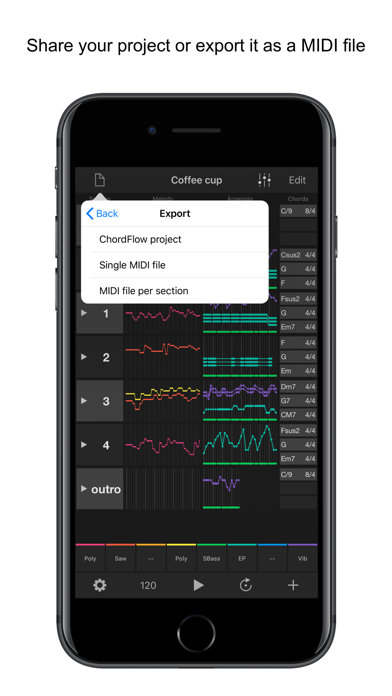 ChordFlow is a chord sequencer with a polyphonic matrix arpeggiator.

ChordFlow is a songwriting sketchpad that will help you create amazing chord progressions and melodies for your songs fast and easily.

HOW TO USE IT?

1. Create a chord progression.
2. Draw an arpeggio – a rythmic pattern for your chords.
3. Compose a melody.
4. Build a complete song adding more sections.
5. Save your song, share or export to your favourite DAW as a MIDI file.

ARPEGGIO
- When you draw the arpeggio you are not specifying absolute notes but relative steps of the chords. When played, the pattern will be translated to the absolute notes depending on the currently played chord.
- Specify the length and rate of the arpeggio grid. Length defines the number of steps in the sequence and rate define the speed at which the sequence is played.
- Add up to 4 tracks to your arpeggio grid. Each track has it’s color, octave and number of parallel voices.
To edit a track you select it with the track selection button, and then choose the required tool.
- Draw complex curves spanning several rows and columns of the arpeggio grid with just one move with Dots tool
- Draw long horizontal lines with Line tool
- Move entire track along the grid using the Move tool
- Clear a region of the selected track with the Eraser tool
- Remove the selected track entirely using the Trash button
- Set Loop region to repeatedly play only the selected section of your arpeggio.
- Adjust notes velocities

SONG STRUCTURE
- A song can contain unlimited number of sections
- Each section has its own chord progression, arpeggio and melody parts
- Add, remove, reorder, rename and clone sections
- Make quantized or immediate  jumps between sections while playing.
- Set a song loop mode. Loop one section. Loop entire song. Or play whole song once.

CONNECTIVITY
- Control any CoreMIDI compatible app
- Control desktop synths through USB or Wi-Fi
- Control hardware synths
- Specify MIDI destination and channel for each track
- Use ChordFlow as MIDI or Audio sender in Audiobus (http://audiob.us/)
- Play in sync with other apps running on the same device or on other devices in same Wi-Fi network using a new technology, Ableton Link (http://www.ableton.com/link/)

SHARE/EXPORT
- Share your projects by AirDrop, Mail, Dropbox or any other app supporting sharing .
- Export to Standard MIDI file and open it in the DAW of your choice(Ableton Live, Logic, GarageBand, etc. )

Tune Maker is a music composition tool which helps you to understand the basic components of music and to quickly begin creating your own compositions.

ChordUp is a chord musical instrument and MIDI controller with a unique fast-access chord selector.