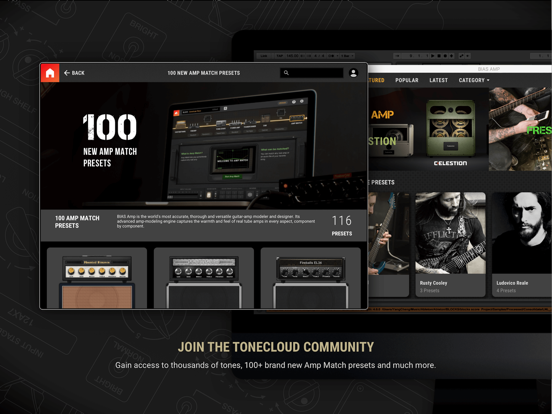 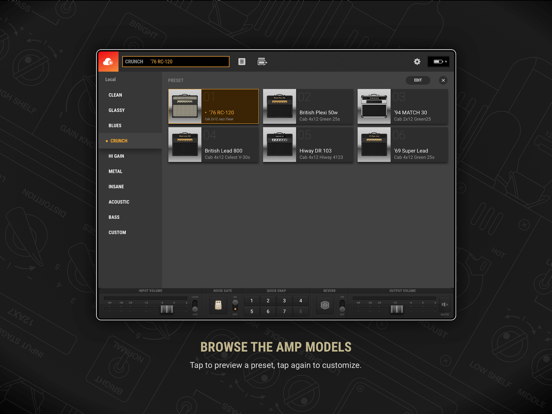 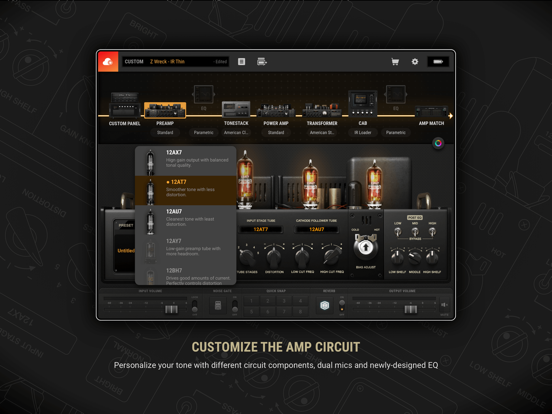 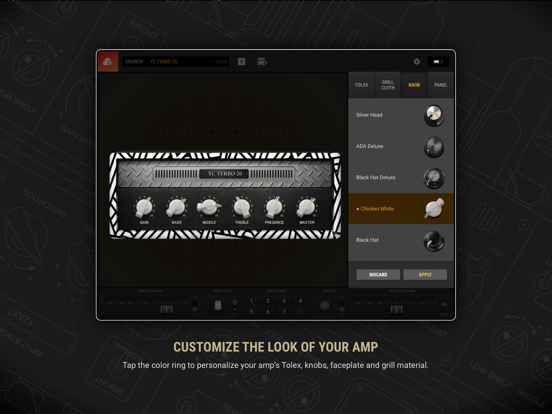 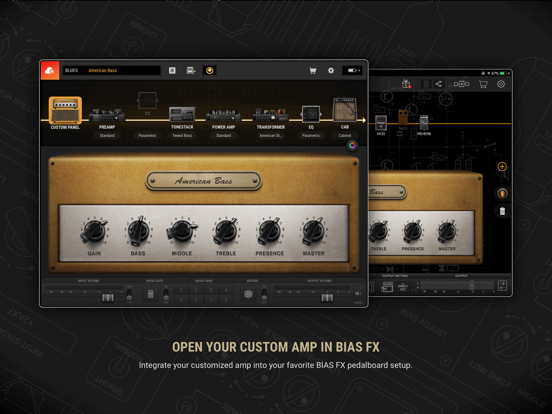 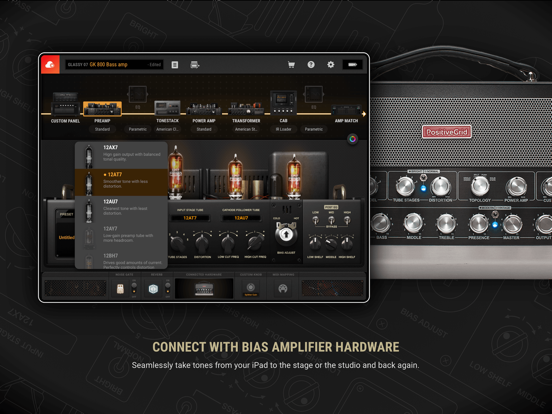 BIAS is an Amp Designer, Modeler and Processor.

BIAS AMP 2 Mobile is a professional virtual amp designer that offers replications of 36 of the best vintage, modern and boutique amps in rock. The app gives you the power to create new sounds by designing your own dream amplifier, letting you swap out tubes, preamps, power amps, transformers, tone stacks, cab, and microphones, all via a powerful and intuitive interface designed for your iPad. Whether you’re a classic rocker, metalhead, jazz player, bluesman or singer-songwriter - and whether you understand how amplifier electronics work or not - you’ll be dialing in killer and exclusive tones in a heartbeat.

BIAS AMP 2 Mobile seamlessly integrates with Positive Grid’s ToneCloud®, which is far more than a simple storage tank for your own custom tones - it’s an active community where thousands of guitarists upload, share and discuss tones. The ToneCloud® gives you access to thousands of custom amps created by artists, recording studios and guitarists like you, so you’ll never lack for sonic inspiration.

To take your tones to the next level, there are 9 full-featured reverbs in BIAS AMP 2 Mobile. These aren’t just simple two-knob reverbs either - they range from lush halls and chambers to intimate rooms, and each reverb has control of decay time, mix level, high and low cut filters, damping and dwell.

BIAS AMP 2 Mobile also works with GarageBand and other audio apps using iOS’s Inter-App Audio and Audiobus. Whether you’re recording, writing songs or honing your chops—at home or on the road—BIAS products place unequaled tone at your fingertips.

• Complete, accurate and versatile component-level amp modeling
• 36 amp models included with the introductory release, with thousands more available via the ToneCloud®
• Factory categories that allow you to organize amps by music genre and sonic impact (clean, blues, glassy, crunch, metal, acoustic, and bass)
• Fully customizable preamps, tone stacks, power amps, transformers, cabinets, and mic selection and placement - mix and match!
• Customize the look and feel of your amp panel by changing the name, tolex, front panel and knobs
• Ability to work the way guitarists think: Tweak gain and overdrive, swap out tubes and transformers, change the cabinet and mic position and shape the tone with different tone stacks and two 8-band equalizers
• Noise gate
• 9 lush and full-featured reverbs
• Create a virtually unlimited number of custom amps
• Preset to recall each of your 8 favorite settings
• Seamless integration with BIAS FX and JamUp; open and save your amp models inside BIAS FX and JamUp with one tap (available via in-app purchase)
• Works with GarageBand and other audio apps via Inter-App Audio and Audiobus

BIAS is a professional amp designer, modeler and processor.

X Drummer is the drum production tool for guitarists, songwriters and mobile musicians.

JamUp is delightful way to jam and practice on your iPad and iPhone.

JamUp is an easy to use drag-and-drop interface that features amps, stomp-boxes and rack effects, all in a single app.